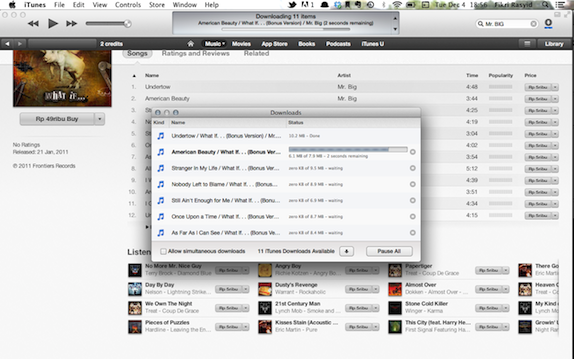 Mr.BIG’s What if – been ordered this to my favorite local music store for months. Finally i able to get it through iTunes instead

Last week, the long-awaited iTunes music store is finally coming to Indonesia. A superb news for me. Refusing to create the US Apple ID to buy legal songs online, i often come to local music stores at Bandung (which aren’t really much these days) to buy CD and rip it to the iTunes for later use. The annoying thing is the restriction of physical store: albums i want to buy is often unavailable. This sucks, and this is what iTunes music Indonesia solves for me: a legal, relatively easy and surprisingly cheaper way to purchase music online, with amounts of collections to offer.

After a week of its availability, i’ve downloaded two albums1 and couple of songs2 which costed me around IDR 150k. The temptation of checking the store and downloading stuffs is ridiculously strong. Downloading a la carte song enables me to buy particular song without wasting money on the whole album. However buying a song feels incomplete comparing to buy an album. Thus it urges me to buy more and more song and ends up spending more money than the usual.

I’m happy that iTunes music store finally come to Indonesia. However, regardless of its solution to purchase music legally, this could drag me to the state of ‘never satisfied with what i already have‘ and ‘wanting to buy things more and more‘. It’s a solution / tool which requires me to practice my ability to control my own desires.